This post has two agendas.  #1 promote another of my Halloween Llama Lacquers.  #2 Do a manicure for the Crumpet's Nail Tarts Halloween Challenge.  I seriously can't remember the last manicure I did for this group.  BTW....this is the group that did the Summer Challenge, previously named Purple Crumpet Fairy Challenge.  It's kinda like Prince, the artist formerly known as Prince.

Anywho.   Today's challenge was black cats. I was tempted to use my one cat stamp, but as I just used it I simply couldn't do it.  Instead I decided to make a zombie cat.  I'm a little obsessed with zombies at the moment if you didn't know.  Been watching season 2 of The Walking Dead on netflix and watching the Resident Evil movies.  I have also been planning a zombie party that is going to be epic.  So I've got zombies on the brains. BRAAAAAAIIIIINNNNNSSSSSS.  Again, I digress.  One of my Llama Lacquers polishes is called Pet Semetary (yes, I know how to spell. In the book, that is what the sign at the cemetery read) It is a silvery based polish with grey, green, and brown glitters.  All the colors a rotting animal corpse would contain.  Nice visual I know.  I put this over a metallic green on all nails but the ring finger.  This I put over a matte grey.  I then hand painted a lovely little black zombie cat.  He looks a little like a rabbit I'm afraid.  I tried to make his one ear look like it had been chewed but instead it looks more like a drooping rabbit ear.  Ah well, what can you do.  It's a cat. 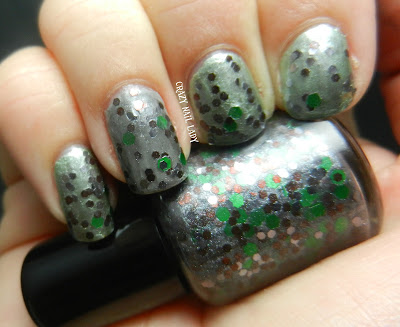 I really dig (hehe) this polish and it is just perfect for a fall halloween manicure.  I hope you like it too! Make sure to check out my other polishes at Llama Lacquers on etsy.

Also, here is what the rest of the Halloween Challenge looks like.  I am going to try to do as many as I can. It's getting harder and harder these days to do a bunch of manicures, but I will try.

As always, thanks a bunch for stopping by. Check out the other beautiful black cats that some lovely ladies did.

Crazy Nail Lady
I started this blog because I had to get it out there. I love nail art! It began only 5 months ago, but it has become an all out obsession. So join me won't you? It should be fun if not a little crazy