Today's mani comes with a story.  A story about strength. Not, the physical kind....although some parts of this story are definitely about physicality.  This story is about the kind of strength that comes from within.  The kind that we all wish we had.  The kind that makes a person do the most amazing things even though it is the hardest thing in the world to do.  The kind that makes people so determined to accomplish a goal that nothing can stop them. The kind of strength that Batman has.  Batman you say? Yes batman.  Batman was handed a shitty deck, right? Parents murdered in front of him, girlfriend taken, all the enemies of Gotham city out to get him.  But instead of crumbling Batman used his brains and strength to help his community. Granted he was a little violent and maybe a little vengeful.  Still, he had no actual superpowers and still became a super hero. That to me is what a super hero should be.  Someone who rises from the ashes to do outstanding things.  Just like the people I am going to tell you about. So as you read this story promise me not to pity the family I am going to tell you about.  Promise not to feel sorry for them. You are allowed to feel sad and you are allowed to wonder at the humanity of it all, but don't waste your time feeling sorry for them.  That won't help.  What you can do is send prayers, or good thoughts and they would gladly welcome your well wishes.  But what would make the most difference is to learn from the strength of this family and to do better because of them.

The Johnsons are from Florida.  They are a family of 7! Mom, Dad, 4 girls, 1 boy.  (You absolutely are allowed to make Duggar family jokes....the mom gave permission once). In all instances they are your typical perfect family.  They are all picture perfect, athletic, smart, funny, and involved in their community.  Every single one of them are overachievers.  What makes them so different is that one of their little girls resides in Heaven and their 4 year old boy is quadriplegic.

On July 1st 2011, the Johnson's were in a terrible accident in the mountains of Tennessee.  Their sweet daughter Hannah who was 6 at the time was killed at contact.  Their oldest daughters Brooke and Kathryn broke multiple bones and were in wheelchairs and crutches for many weeks.  Susie, their mom who was pregnant at the time with their beautiful daughter Renee, suffered a concussion and had most of her ribs broken.  Owen almost died but was revived by the EMT's.  It took some time to know the extent of his injuries but finally the doctors pronounced that his spinal cord had been partially severed and he would have no use of his arms and legs and would have to be on a ventilator to breathe. Needless to say this was pretty devastating news for everyone.  They spent months living at the Ronald McDonald house, far from their own home, getting to learn Owen's disability and recovering from their injuries.  Susie and her husband David wrote extensively on a website to keep people updated on what was happening with their lives.  At times it was almost too hard to read as you could feel the pain and anger through their words.  The emptiness they felt from the loss of their daughter. The frustration at not being able to hold Owen through all the tubes.  Other times I simply sat in amazement at the way Susie was able to look at situations with an open mind when it was clear to me other people were being complete douchebags.  I thought about her pregnant belly (as I was pregnant at the time also) and how hard it must be to feel joyous about the new life when one so precious to her had been taken from them. And I constantly thought about how the girls must miss their sister  so terribly and how it must have been so hard for them to understand why this could happen to them.

I don't want this story to bring you down, because although it is hard to imagine, this is a story about strength remember.  And I know every parent out there can't even begin to fathom what Susie and David must have been going through.  For myself, I would hug my daughter Holly (who is only a week younger than Owen) constantly and cry every time I read one of Susie's updates on the emotional and physical roller coaster everyone was riding on.  But the reason this story is about strength and hope is because through it all they fought. When Brooke woke up in the wreckage of the accident she didn't ask for help, she told the EMT's to help her brother and sisters.  When Susie thought she might die from it all, she held on and even told jokes.  When Katheryn was in so much pain from the broken bones or the removal of all her hardware, she still wanted her Justin Bieber. When Owen came out of spinal fusion surgery, he still managed to smile the biggest sweetest smile.  When David felt hopeless from being unable to take away his family's pain he gave them even more support. And even baby Renee, only a wee thing in her mommy's belly, held on until it was her time to make an appearance months later.  There a million more instances of strength and courage that they have shown that I simply don't have time to list.  But what I can tell you is where they are today.

The girls have had all of the hardware removed that was put into them to help heal their bones.  After seeing all of the metal in them I am sure that if you had put a tv antennae on them they could have gotten some pretty good reception.  Owen has had a diaphragm pacer put in (by the same doctor that performed surgery on Christopher Reeves, Superman himself!). This means that he can breathe without the aid of the ventilator.  If that's not enough it also means that his mommy can hold him in her arms without the interference of all the tubes.  Owen has also been able to go in the pool, play video games using muscle stimulation and eye movement, and sword fight with his dad :-P  Brooke and Katheryn are both swimming on a swim team and of course Renee is as cute and as healthy as can be. They have survived Hannah's birthday and the one year anniversary of the accident. But I think mostly, they have lived their lives.  They have not crumbled.  They have not been holed up in their homes feeling sorry for themselves.  They have gone out and continued to enjoy life.  They have told jokes.  In fact, I knew Susie was beginning to heal when she started making fun of people again.  They have been strong.  For themselves and for each other. They have said "NO! I will not accept defeat and I will not lay blame." They have risen above and fought.  They have been superheroes. They ARE Batman!

Thank you Johnson's for showing me the meaning of the word strength and for giving hope to so many hopeless people out there.  You really are an inspiration. Keep fighting!

If you want to know more or see pictures of the Johnson's check out the facebook page dedicated to helping them here at Hannah's Helpers. 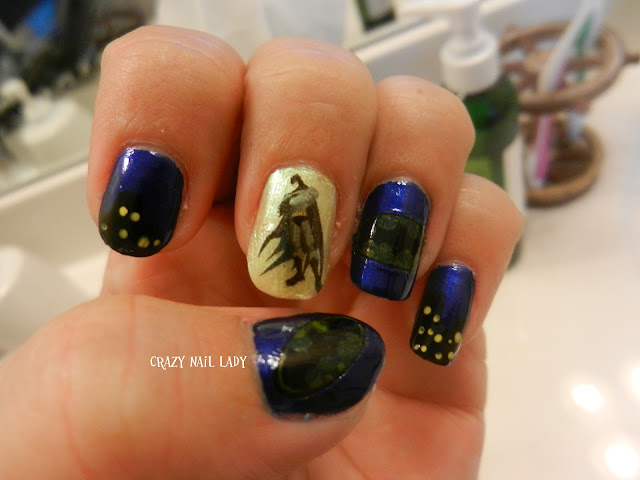 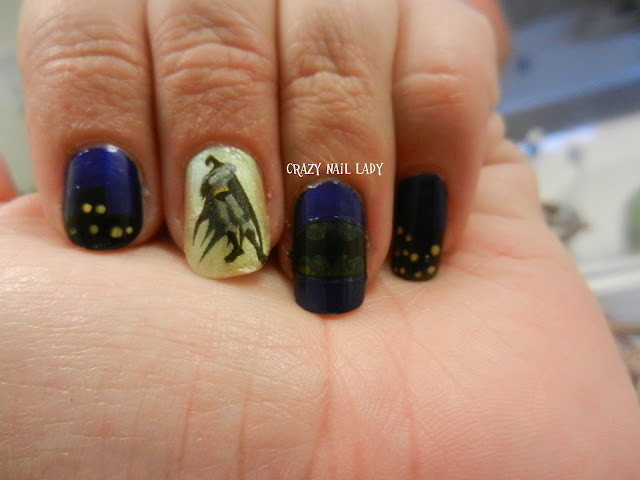 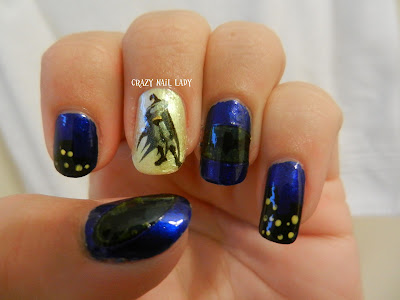 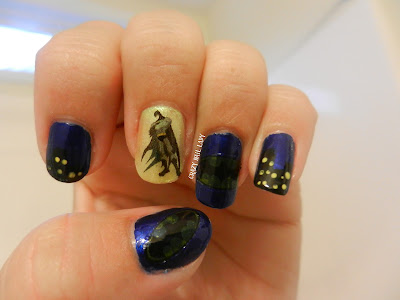 If you want to know any of the colors let me know.  I'm exhausted as of now :-P I love the batman decal I made, a little disappointed in the batman emblems. oh well, can't be perfect all the time!

Thanks for looking (and reading today)

Crazy Nail Lady
I started this blog because I had to get it out there. I love nail art! It began only 5 months ago, but it has become an all out obsession. So join me won't you? It should be fun if not a little crazy